is CANCELLED due to Covid

It is with regret that the Withernsea Ladies' Choir Christmas concert will not take place this Saturday, 4th December due to the high Covid rates in Withernsea and the surrounding areas together with the latest Covid rules.
The Choir feel that it would be unwise to gather an unknown quantity of people coming into potential contact with others who may unknowingly have the virus.
The Choir feels it is a responsibility to safeguard you the audience as well as our choir members and helpers.
The Choir will perform a free concert in Withernsea when a safe environment can be guaranteed at a later date.

The Ladies are very pleased to have been asked to sing at the reopening
ceremony of St Nicholas Church, Withernsea
on Fri 29th October 12 - 2 pm

In the 15th century the old village of Withernsea, along with the original parish church, was reclaimed by the sea after a series of storms and coastal erosion. Following the loss of the village and church, St Nicholas', and a new village were built on higher ground and further inland in 1448.

Like its medieval predecessor, St Nicholas has battled strong coastal weather and in 1609 during a storm, it lost its roof and fell into disrepair becoming a romantic ruin. It remained a ruin for over 200 years, until Owthorne church was lost to the sea in 1816. This resulted in a major restoration appeal to rebuild and repair St Nicholas'.

St Nicholas' was used for regular worship until 2013, being closed in 2014. It came into the care of Churches Conservation Trust in 2019 and is currently closed to the public whilst major repair and conservation work takes place.

New members are welcome, however, due to Covid restrictions, we would ask that you message us via our website Contact Us page to enquire of full details on joining us.

The Withernsea Ladies’ Choir is pleased to announce their return to rehearsals this coming September at The Methodist Church Hall, Hull Road.

The choir’s last performance was at the Withernsea High School on Thursday, 12th March 2020, together with The Manchester Camerata.  Our end of March concert had to be cancelled with the onslaught of Covid however, throughout the lockdown, having mastered a new technology of zooming, the choir met each week to rehearse new works whilst appreciating the social aspect of being together, albeit virtually. They have been eagerly waiting to get back and sing together.

New members are welcome, however, due to Covid restrictions, we would ask that you message us via our website Contact Us page to enquire of full details on joining us.

The sun is shining (on and off), and the choir is thriving. Through thick and thin the choir has carried on with virtual rehearsals on alternate Thursdays and the other week as a social fun and relaxed singalong with Paul. We are all well but wanting to get together and sing. Unfortunately, this looks like some while yet and as much as most have had one or both jabs, it is still unsure how long before we see the true effect of the vaccination programme.

It is frightening to see so many people thinking the virus has been quelled and with the relaxed covid rules there are some who are out and about with little or no regard for social distancing that is supposedly still in force. Often you hear that this group is only a minority but when driving through Hull city on a school run I believe it to be a very large minority!!!

Please continue to take care and we hope to see you in a safe environment at some time in the future.

The children spent some time being quizzed by Robert as to "what is the instrument?" which led to some amusing answers. They were then accompanied by the orchestra to a newly commissioned work - "Bluebeard of Withernsea" by Kate Pearson. Kate has been working with the schools in devising the concept with a twist then orchestrating and leading the children. It was a mammoth task but what a wonderful outcome to months of hard work.

Finally, the ladies' choir sang "Pictures of the Mind" which had been written and composed by residents from local care homes, then orchestrated by Richard Taylor and Janet Fulton. It is based on the residents' reminiscences and tunes which they worked on with members of the Camerata, Janet, Lynn and some of the Withernsea Ladies. Interaction with musical instruments encourages the residents' creativity and involvement and three movements were entirely performed on percussion, including broomsticks, by very enthusiastic and agile residents. They loved performing with the orchestra and included their own verbal appreciation throughout their pieces. The Withernsea Ladies' Choir gave a very polished performance of the remaining five movements and all eighteen ladies looked very elegant in their performance outfits. 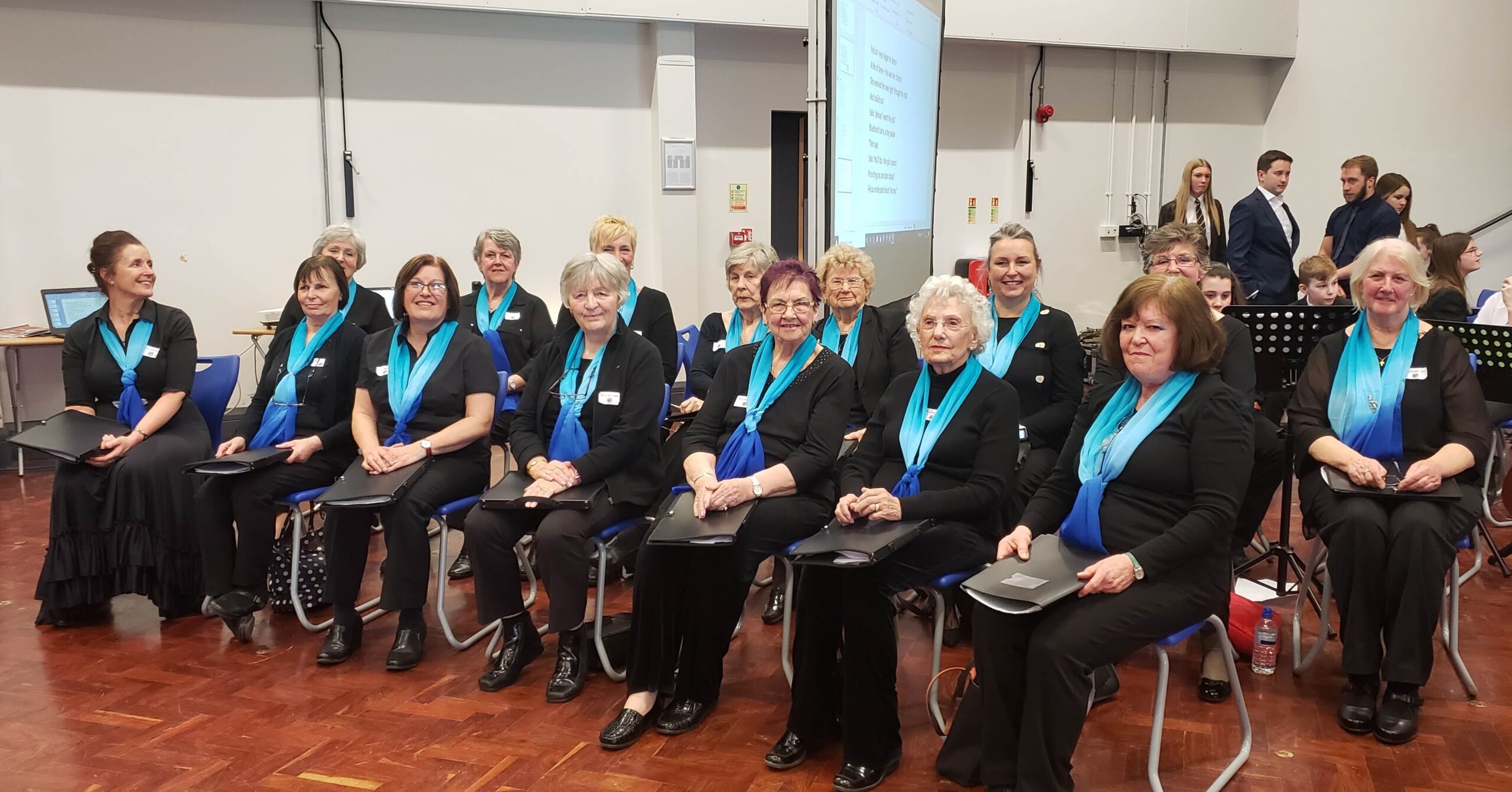 In view of the Coronavirus situation, we feel it is our responsibility to safeguard our choir, guest and audience members and therefore postpone this coming Saturday's concert. 21st March 2020

What an absolute blast...
The Ladies excelled themselves at this afternoon's Christmas concert at The Meridian Centre with Phil White of BBC Radio Humberside compering the show, bringing his own special brand of humor and presentation.
The choir sang, played, and read Christmas poems and sketches. Phil White acted out as Father Christmas in a sketch with Jean Carter as a disgruntled elf, he also read a fun poem and, displayed his skills with the kazoo whilst dueting or should I say, duelling, with Patrick on the musical saw. Paul Pike, pianist for the group, composed descants and a lovely version of the drummer boy with Elizabeth Woollias accompanying on the drums and sleigh bells. Christine McLaren read out an amusing poem "I Won't be Home for Christmas" which she had written herself.
A packed house was enthralled by the choice of music which included amusing versions of "The Twelve days after Christmas" and "No time to Diet" as well as their chance to join in with the choir with traditional carols and Christmas favourites.
"Best we've ever heard the choir..." "Superb singing..." " Have had the most enjoyable time this afternoon..." just some of the comments from the audience as they left, happily humming "I'm dreaming of a white Christmas."

Patricia Watkinson, president, thanked all those for taking part and especially to The Big Local, The Lions and the Buffs who support the choir, and to the local businesses who donated prizes towards the raffle and of course to our loyal followers, the audience. A great big thank you went to Phil White for his time today.
Well done everybody

The Withernsea Ladies do it again... A wonderful concert to a warm... enthusiastic audience. Today's guest, Andrew Wells, had audience and choir alike in stitches (of laughter) with his own compositions played on guitar, and humorous lyrics of folk tales from around the area. Patrington Fire Brigade had a complete song to themselves and I particularly liked his song regarding losing his land (due to erosion) to the Dutch. We will welcome him back.
The ladies excelled themselves with some tricky part songs and very soulful pieces which were tenderly sung. Lynn Massey-Davies sang the solo of Summertime with great feeling and clarity and Linda Beever gently sang the opening solo to The Lord Bless You. Thank you to a lovely audience who joined in and sang with gusto... you've all earned a place in the choir.

Another fantastic concert by The Withernsea Ladies Choir with Paul Pike on the keyboard and Patrick Pearson conducting at The Meridian Center. The March Family Ensemble playing as a quintet played a series of tangos and then accompanied the choir in beautiful arrangements of "Sunset Sunrise" and a rousing chorus of "Oom Pah Pah" We hope our guests return again. 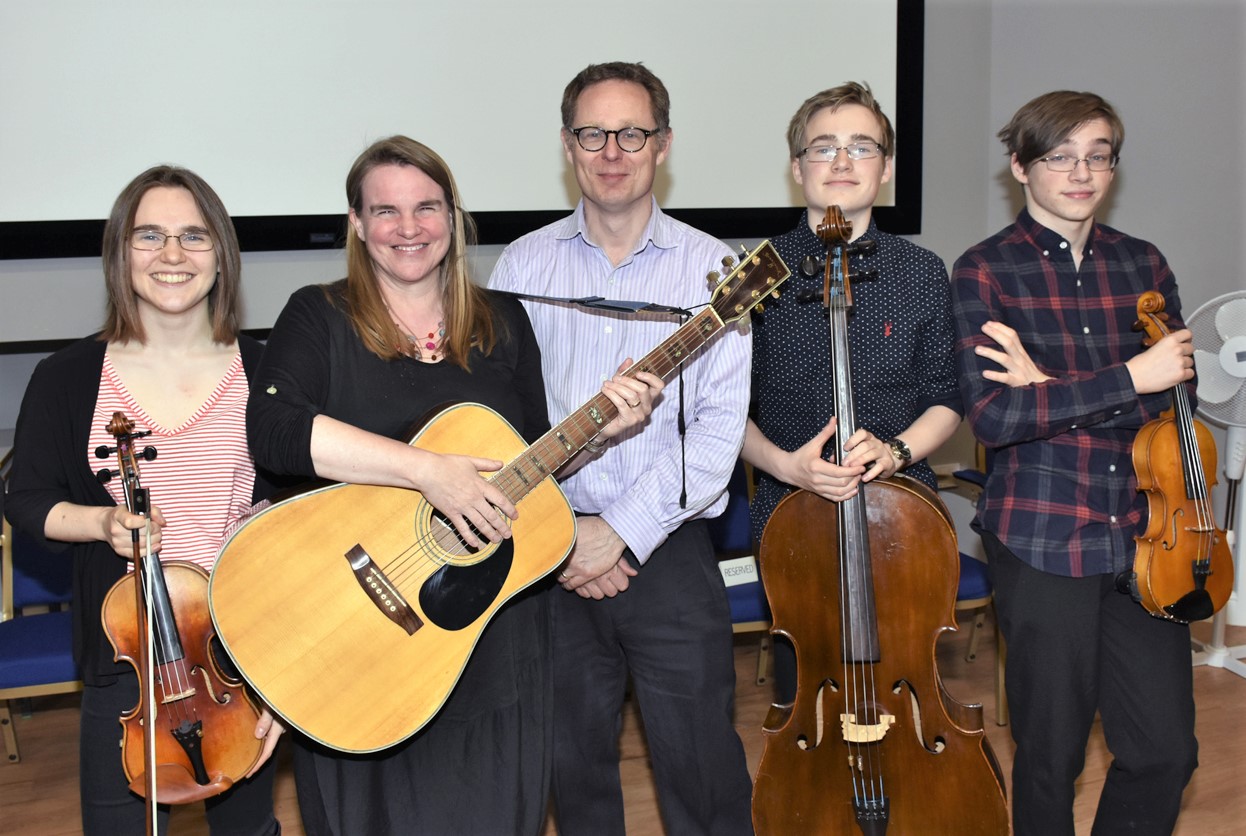 Please note our next special concert "90th Anniversary Concert" on Saturday 23rd June 2018 at 2:00pm will be at

Tickets on sale in advance and on the day at the door. 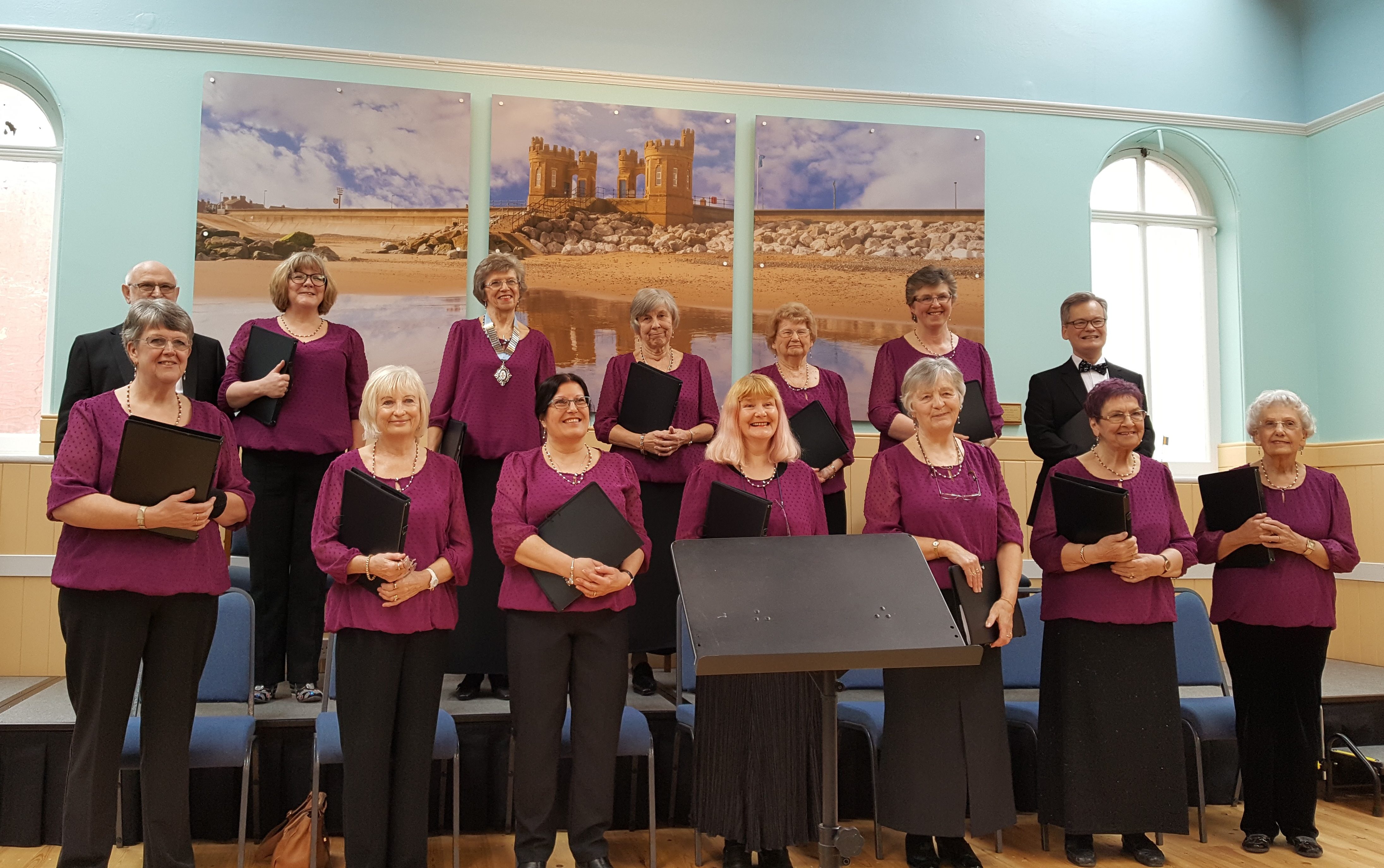 The ladies wowed and entertained a full house at The Methodist Church community rooms, Withernsea.  Singing a varied selection of music from Les Miserables, Mary Poppins, West Side Story and others, the audience was encouraged to participate on occasion whistling along to "A Happy Tune" and  joining the choir with "Danny Boy."

The Parisi Quartet played two sets of beautiful arrangements, including JS Bach, The King and I, Oklahoma and a Beatles medley.

It's the choir's 90th anniversary this year and they've already started celebrating. At the beginning of March they sang with The Manchester Camerata orchestra at The Meridian Centre and hit the headlines in The Gazette and on air with BBC Humberside.

The concert was varied, entertaining and fun throughout. 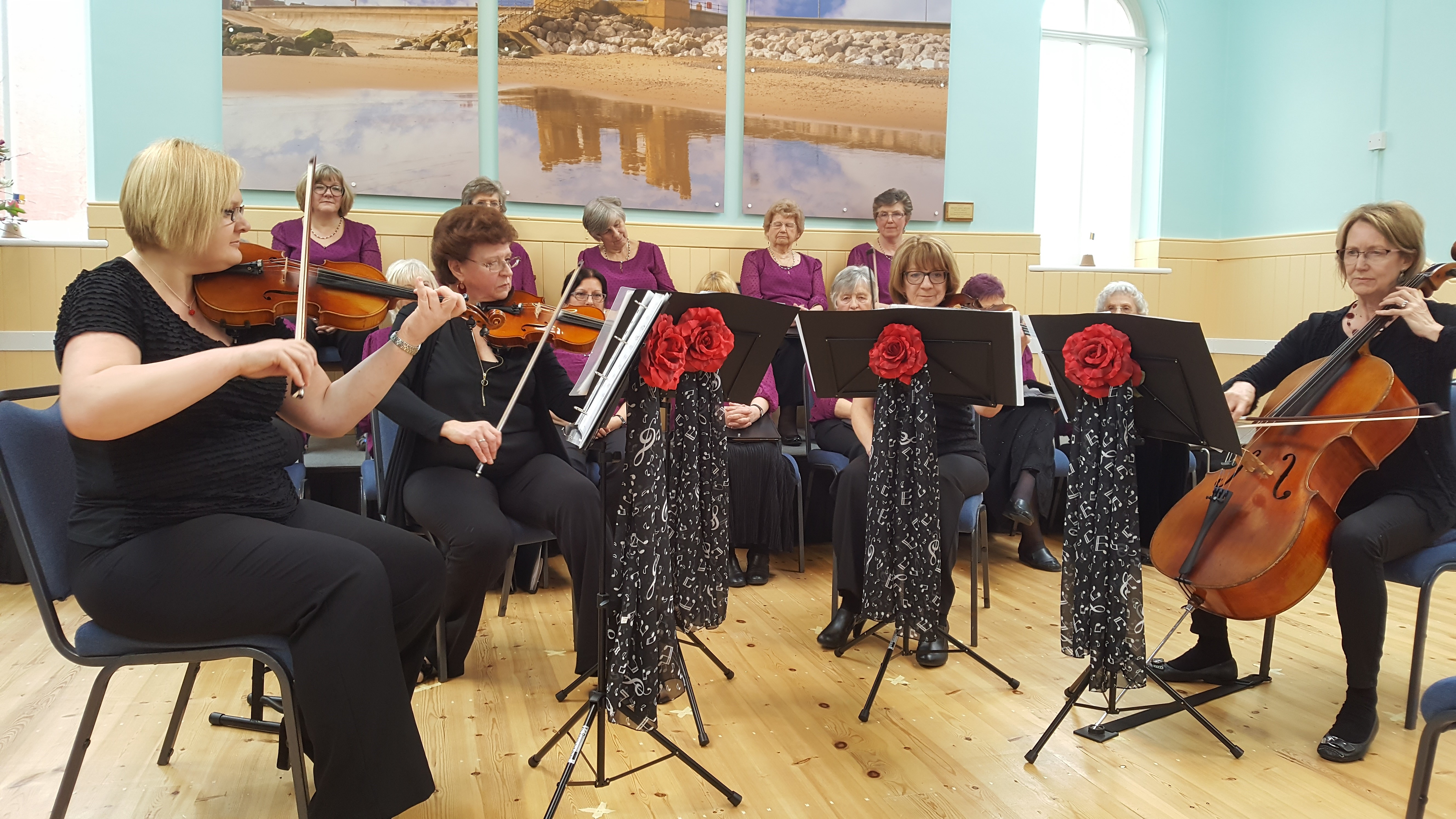